The park is famous for its 450km2 Bungle Bungle Range. One of the world’s outstanding examples of what has been termed ‘cone karst’, the range has been formed by a complex interaction between geological, biological, erosional and climatic features. Purnululu’s diversity of landforms, along with its location in a transitional climatic zone, supports a range of distinct vegetation communities, ranging from desert shrubs along the exposed plateaus of the Bungle Bungle Range, to the rainforest communities along Osmond Creek valley.

The Bungle Bungle Range comprises a myriad of dramatically sculptured conical ‘beehive’ towers formed from sandstone. These towers undergo remarkable seasonal variation in appearance, including striking colour changes after rain. The intricate maze of the beehive features is accentuated by narrow, sheer-sided gorges lined with Livistona fan palms and other vegetation. The cliffs are sculpted by seasonal waterfalls and pools and it’s taken 20 million years of extreme weather conditions to create the range’s distinctive sandstone towers and banded beehive structures.

Dark bands, formed by cyanobacteria, curving horizontally around the domes, are distinct from the lighter orange sandstone. Cyanobacteria are single-celled organisms and are indeed some of the oldest life-forms on earth. These organisms have been found in rocks in fossil form in other locations across Western Australia and it’s believed they could be up to 3500 million years old. The cyanobacterial bands can be up to a few metres wide, yet only a few millimetres thick. These coatings actually help stabilise and protect the ancient and fragile sandstone towers.

While sandstone towers and cliffs are found in from other parts of the world, including in other parts of Australia, the spectacular features of the Bungle Bungle Range are unrivalled in their scale, extent, grandeur and diversity of forms. 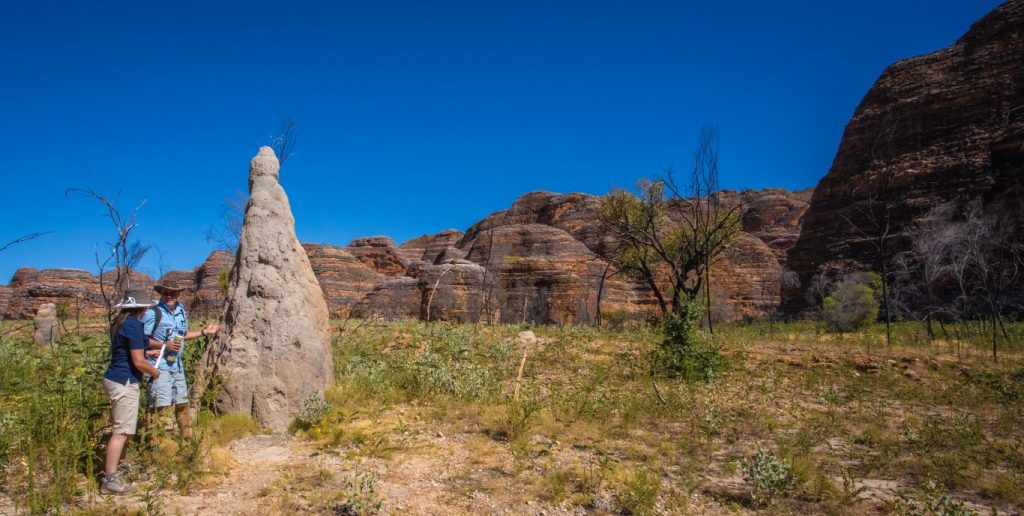 The park’s domes, gorges and wet season waterfalls were almost unknown to the world outside the East Kimberley until 1982 when aerial pictures of these amazing formations were released internationally. The National Park, which was listed as a World heritage site in 2003, is jointly managed by the Western Australian Parks & Wildlife Service together with the Traditional Owners ensuring that they are to be protected and admired for future generations.

A two night stay at one of the luxury safari camps, touring by 4WD, walking amongst the beehive domes and the ultimate helicopter flight above the Bungle Bungles is a must do on any Kimberley adventure. All our Wilderness Adventures through the Kimberley feature a comprehensive guided experience in the Bungles – it is truly unforgettable.

Contact us today for further information & see how we can tailor a plan to suit your requirements.

4WD or not to 4WD? That is the Question.

The Best Attractions to See in Kununurra