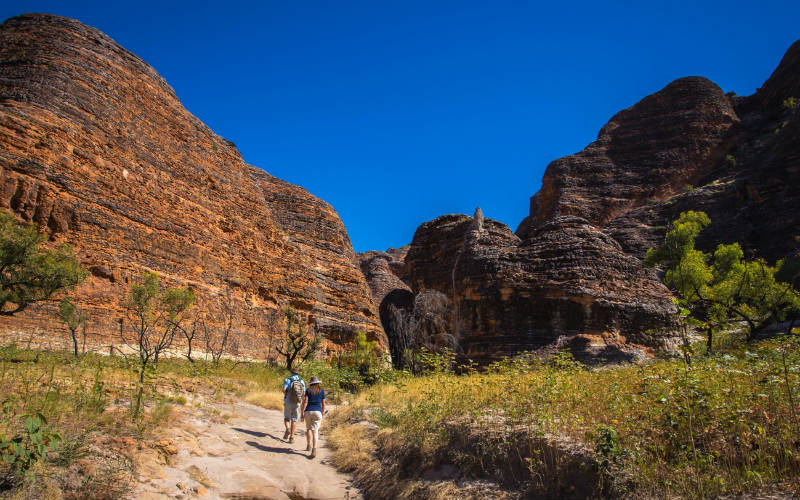 These spectacular rock formations were created by layers of sandstone which resulted in the beautiful orange and dark grey strips resembling beehives. The orange layers are stained with manganese and iron mineral deposits, while the grey layers of sandstone hold more moisture supporting dark algal growth.

The Bungle Bungles are about 350 million years old and were originally part of an ancient river bed. The layers of sandstone were compressed and then lifted up to form a mountain range. Over time the wind and water has eroded the sandstone and sculpted these amazing shapes we see today.

The Boab Prison Tree is located near the town of Derby and can be enjoyed with Kimberley tours from Broome. The tree is believed to be about 1,500 years old with a girth of 14 metres. Due to its large hollow centre it is said to have been used as a temporary lock up for Aboriginal prisoners on their way to Derby in the 1890’s.

Kimberley Aboriginal rock art is some of the oldest in the world with evidence showing that some of it dates as far back as 50,000 to 60,000 years ago. The Kimberley region has a diverse range of rock art, with a variety of styles reflecting the local cultures and artistic developments. Rock art provides information about when and how the local people arrived, and the culture and beliefs during this time. The art also provides insights into the environment at the time and how the local people lived and adjusted to the changes in climate.

The Buccaneer Archipelago is made up of 800 to 1,000 ancient sandstone islands rich in secluded white sandy beaches. The area is part of a drowned coastline from the Pre-Cambrian age 1,800 to 2,500 million years ago. The area has massive tidal ranges which create the phenomenal horizontal falls in Talbot Bay. The tides and whirlpools in the area created many dangers for pearling fleets during the late 1800’s where many divers lost their lives. Some of the islands pay testament to the dangerous conditions with numerous isolated graves.

The Devonian Reef existed during the Devonian era about 350 million years ago. Now you will find three amazing gorges which were all once a part of this reef system, Geikie Gorge, Windjana Gorge and Tunnel Creek which are all included in Kimberley tours from Broome.

The Kimberley is home to some of the most amazing dinosaur footprints in the world. With 1.7 metre prints, they are the largest known footprints discovered in the Kimberley region. The footprints are estimated to be 130 million years old. The size of these large footprints suggests that the dinosaur who left them were around 5.3 to 5.5 metres high at the hip!