Kimberley Tours, A Private Guided Experience > Broome > Our Picks of the Best Gorges to visit in the Kimberley

Our Picks of the Best Gorges to visit in the Kimberley

Our Picks of the Best Gorges to visit in the Kimberley 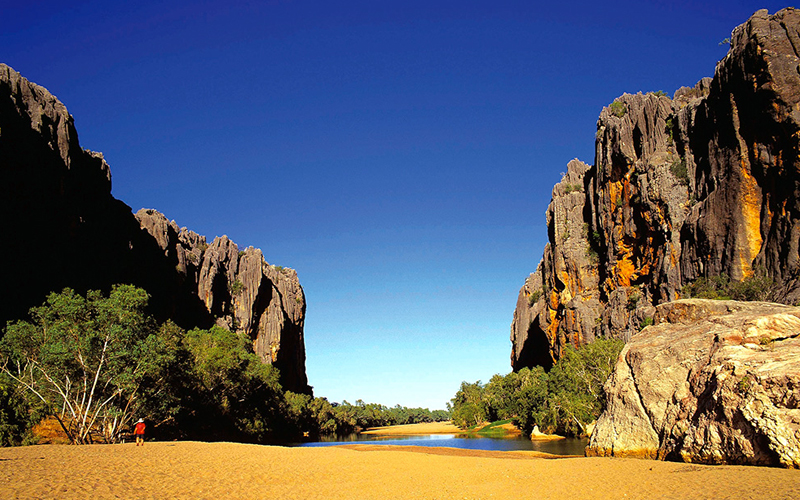 A journey through the Kimberley is a true Aussie outback adventure. A 4×4 Broome tour can see you taking in amazing scenery while visiting many spectacular gorges. 4WD tours Broome offers the opportunity to see the best the Kimberley has to offer in comfort and safety, and some of the amazing natural attractions you’ll experience are the many breathtaking Kimberley gorges.

The Windjana Gorge was carved out over millions of years by the Lennard river which was part of an ancient reef system 350 million years ago. The Windjana Gorge is located in Windjana Gorge National Park which stretches over 2000 hectares, and is one of the spectacular gorges you will visit on a 4×4 Broome tour.

The walls of the gorge tower up to 100 metres at some points. During the wet season the Lennard river runs through the gorge, however during the dry season tranquil pools form surrounded by shrubs and trees. Freshwater crocodiles can often be spotted in the pools.

One of the lesser visited gorges in the Kimberley, the Lennard Gorge is tougher to access but the incredible views are well worth the effort. The Lennard Gorge is approximately 8 kilometres off the Gibb River Road and then a 30-minute walk from the carpark. There is no swimming at the Lennard Gorge, but arriving shortly after the wet season means being rewarded with a spectacular waterfall.

Tunnel Creek is Western Australia’s oldest cave system and is famous for being a hideout in the 1890s by Aboriginal leader Jandamarra. 4WD tours Broome will take you on a 750-metre adventure through the tunnel to the other side of the Napier Range, returning the same way as the roof has collapsed near the centre.

The tunnel contains several permanent pools that you must wade through, so be prepared to get cold and wet. Along the way you will see many bat species and stalactites descending from the roof.

Manning Gorge is one of the most spectacular swimming spots in the Kimberley offering the opportunity to see Aboriginal rock art and camp by the tranquil pools of the Manning River. Between May and July, you can view the stunning waterfalls at their best.

Bell Gorge is located about 245 kilometres north-east of Derby in the King Leopold Range National Park. The gorge is about 300 metre above sea level and continues into a series of waterfalls. Bell Gorge’s spectacular waterfall plunges into a deep crystal-clear pool surrounded by orange cliffs, and is definitely one of most incredible places to swim. Bell Gorge is the perfect spot for photography, swimming and enjoying nature.

Galvans Gorge is less than a kilometre off the road and can be quite busy. There is no camping here but the falls are large enough to sit on the rocks underneath while letting the water cascade over you. This horseshoe shaped gorge has been a very popular place to visit for thousands of years.

Adcock Gorge is located along a very rocky 4WD track approximately 5 kilometres off the Gibb River Road. The short walk to the gorge will take you across a shaded lily pond. There’s a small waterfall cascading down into a small pool near what is believe to have been an Aboriginal burial ground. There is no camping at Adcock gorge unfortunately.